You will receive additional complimentary videos/
updates by email. To complete the process please click the link in the email we will send you.

You will receive additional complimentary videos/
updates by email. To complete the process please click the link in the email we will send you.

Many news articles have raised the issues of getting an IT strategy to work. The Wall Street Journal talked about Volkswagen Group’s difficulties in putting together a program to take on Tesla. There was another piece about retailers facing difficulties in going digital and making sure their e-commerce operations are able to offset the decline in foot-traffic-based sales. Another example is how game-based apps have struggled to handle the significant volume of people spending more time at home and more time playing game-based apps.

What separates the digital strategies of the winners from the losers? If you compared the two, they’ll look fairly similar. How many companies have decided that streaming is the way to launch video content? Just about everyone is doing it, but some are winning and some are losing. Almost every luxury brand has shifted the bulk of development spending to building out well equipped e-commerce capabilities—but some are doing better than others. In cosmetics, almost everyone is moving toward the influencer model. Some are doing it better, and some are doing it worse.

What works and what doesn’t work? How do you distinguish between the two?

Here’s the big insight. For a long time, Silicon Valley was the best practice in digital. And I think Silicon Valley is still the best practice in digital in certain areas. In other areas, like payments, they have fallen behind. But in a majority of situations, the methodologies and techniques they’ve developed work fairly well. But what large companies are confusing is the maturity of the approach. For example, if you’re a 2-man or 20-man operation and you use a system of going through multiple iterations, it’s okay to fail numerous times, discard ideas, throw out things and rewrite code because the base of your sunk costs are so small. It’s easy to get 20 people around a table for a startup and quickly change priorities. But when you have an organization of 10,000-60,000 digital practitioners in a large industrial conglomerate, you want to have lean and agile practices, but you need to compensate for the fact that it just doesn’t work the same way.

Companies fall into a trap of saying something like, “I want to be like Stripe and have their same systems and processes.” Stripe isn’t very small, but they’re much smaller than Volkswagen or GM in terms of their digital organization. If a large company fails to replicate the attributes that make a small startup successful, the large company thinks they failed because they weren’t good enough at being small. In reality, you can take some of those attributes and infuse them into your culture, but you’re never going to act like a small company. If you are a large company and think you will be able to act like a small company, you will most likely fail.

If you’re a FIRMSconsulting Insider, we have a study where we help an insurance company develop a new digital and IT strategy program. They want to use smartphones and iPhone data on consumers to track how they spend their lives. For example, if someone walks a lot during the day—it doesn’t matter whether they have a Fitbit, a smartwatch or an iPhone—that data links into the company’s servers in the cloud somewhere and says that if Jennifer walked 2,000 steps today, her premiums should be less than Michael, who walked 10 steps today.

That study began because the insurance company’s IT department said they wanted to use technology to become better at what they do.

We ran into a hurdle that’s very common in companies today, and it’s going to exemplify an important insight. If you have a system that’s able to change the amount of money an insured client pays per month, that changes the entire business model of the company. It does not changes just IT systems. It changes the business model.

Here’s another example. This company uses a massive broker network to sell insurance policies. When someone signs up for the policy, they pay for two years’ worth of premiums, and then the broker is paid a bonus based on the premium. If the premiums are $2,000 a year, the broker gets 10% of that. But what happens if the premium changes monthly? The company doesn’t know the premium’s cost per year, so how do they pay the broker the full bonus at the beginning of the policy? If you can’t do that and the brokers are up in arms, you’ve just changed the entire distribution model of the company.

In this situation, the decision to go with this tech platform change must be made at the business-level of the company. Unless the business agrees that this is going to be their new distribution model and it compensates for those changes to its business, it can’t change the way it collects data and measures the premiums for clients.

In developing an IT strategy, you have to start with the objectives of the business and what it is trying to achieve. 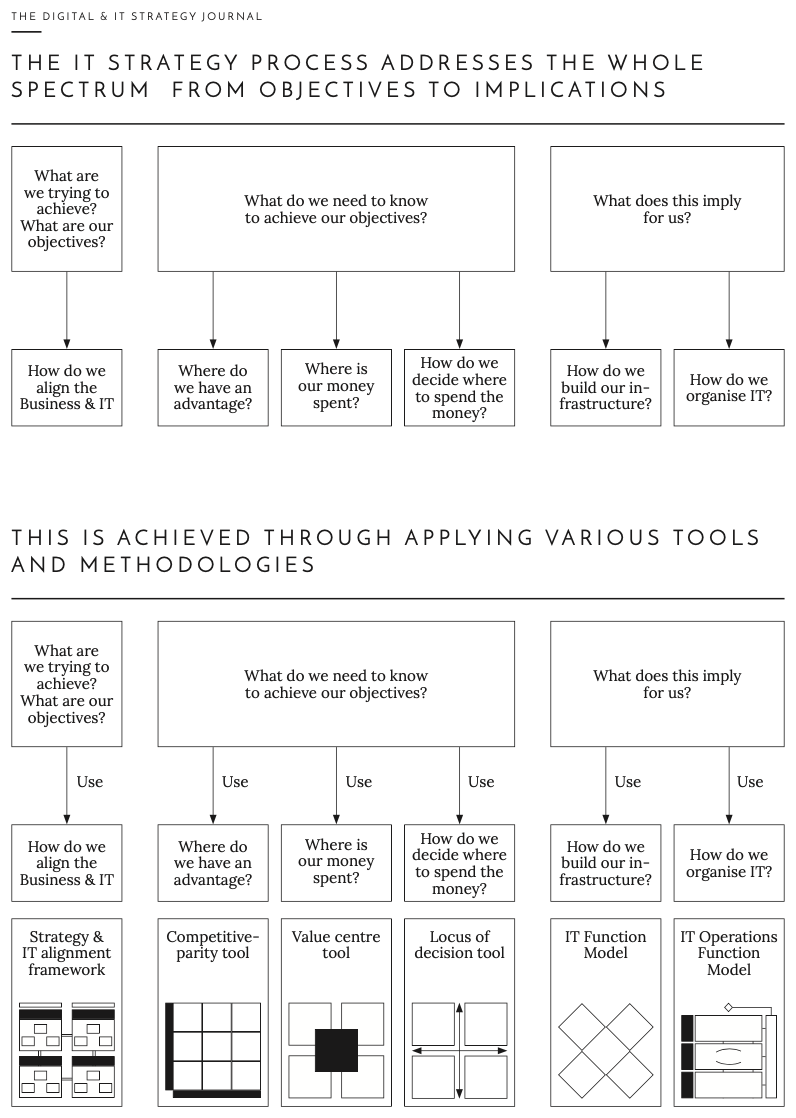 This exhibit comes from our Digital and IT Strategy Journal. FIRMSconsulting has different levels of clients—we have executive coaching clients who are executives in industry, and we’re also a private equity firm, so we do a lot of private equity work. It’s difficult to give advice in every single call to clients in industry and to our business partners who are doing digital work. These journals give them the guidance they need to solve a problem. We also have journals on transformations and turnarounds, competitive strategy, corporate strategy, marketing strategy—a whole spectrum. That is why our executive coaching clients and business partners do so well, and those journals are only available to them for now. This exhibit gives you an idea of how you need to develop a full digital and IT strategy, but also the tools you will use.

It’s not enough to say you’re going to roll something out. You are rolling out a massive organization-wide change that’s being catalyzed by digital, but it’s not led by digital. At the end of the day, the needs of the business still take precedence, and digital and IT must help them achieve that.

This is an excerpt from Monday Morning 8 a.m. newsletter, issue #13.

Want to learn more about how FIRMSconsulting
can help your organization?

A strategy expert vs. a CEO

A strategy expert vs. a CEO I'm going to end today's Strategy Insights by talking about a client and some of the challenges, successes and particularly one of the deep insights we developed for this client. This client is named Raka, and she’s of Indian origin. She has worked at…

Three people that influence you the most

Three people that influence you the most The first big theme is titled, “The Three Most Influential People in the World: Roula Khalaf, Gwen Robinson, and Matt Murray.” This is a very deep insight. We have a lot of coaching clients, including very senior coaching clients. I’ve asked our coaching clients,…

Please confirm, if you accept our tracking cookies. You can also decline the tracking, so you can continue to visit our website without any data sent to third party services.

Are you a leader or an analyst?

Sign up to receive exclusive preview episodes from powerful training programs with ex-McKinsey, BCG et al., partners. Learn the skills to become a leader and contribute to the world.
This is your time. Your stand begins now.